Gadzooks!  For as long as we can remember, many of the 1-800 LEMON LAW family has spent their mornings listening to Preston & Steve, first on Y-100 and now on 93.3 WMMR in Philadelphia.  So, we were a little taken aback when the gang on the show started to sing a competitor’s jingle recently.  All in good fun, we dropped a quick note to our pal Preston, who told us he had been seduced by cookies (hey, who hasn’t?).  We asked how we could garner a mention, being that we are the oldest and largest in the land.  Preston immediately replied with the magic word…..donuts!

Yesterday, Jason Ryan from our settlement department, along with long-time employee Lori Lee Harrison, paid a visit to the WMMR studios armed with a few dozen sweet treats for the crew.  Preston & Steve kept to their word, telling their listeners we were “exemplary” and reminding them that 1-800 LEMON LAW is the only lemon law firm in the Nation honored by the American Bar Association.  They also let Lori & Jason sit in for the entire show, which was a big treat for both of them.

Here’s a picture and a soundbite from the show.  Thanks to Preston, Steve, Casey, Kathy, Nick, Marisa and the crew.  You guys rock! 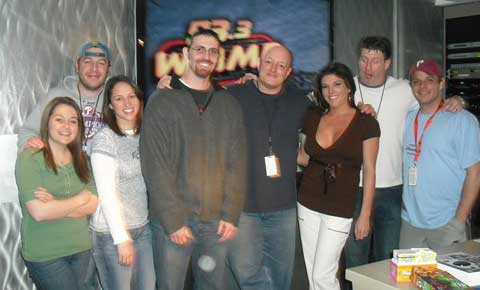 Soundbite: 1-800-Lemon-Law Plug on the Preston and Steve Show!