Making Use Of Lemon Law

Making Use Of Lemon Law

When Karen Powell stopped her new Ford Windstar and shifted it into "park," the automatic sliding door suddenly flew open. 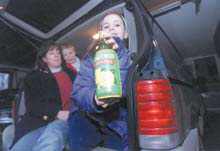 Staff photo by Amy Dragoo Chrissy, holding a bottle of lemon juice, David and their mother, Karen Powell, sit in the Ford Windstar they had replaced after seeking protection under the PA Lemon Law.

Powell's two young children were with her at the time, and the experience badly frightened them all.

"The car was in all the time for repairs," Powell, an artist who lives in West Whiteland, said.

She couldn't drive the car for 72 days while it was being repaired and she finally sought protection under Pennsylvania's Lemon Law.

Today, Powell drives a 1995 Plymouth Voyager and has no problems with it.

Last year, the eight-lawyer firm, with offices in Ambler, PA, and Haddonfield, NJ, handled 3,000 cases, most of those in Pennsylvania, New Jersey, and Delaware.

Consumers who buy lemons on wheels are protected by two laws, the Magnuson-Moss Warranty Act of 1975 and Pennsylvania's version, which passed in 1984.

Pennsylvania's law is one of the older laws on the books and "is getting a little long in the tooth," according to Kimmel.

Still, state law protects consumers when they buy a lemon. Here are some features of Pennsylvania's Lemon Law:

Attorneys such as Kimmel & Silverman require no retainer. That's because the law requires the manufacturer to pay an attorney when a claim is successful, either out-of-court or after a court case. About six cases in every 100 eventually go to court.

As for what you can do to protect yourself from a possible lemon:

Top of the Page

Are YOU
Driving a Lemon?